A new vision for IUPUI

Indiana University and Purdue University took the first steps on a bold new vision for higher education in Indianapolis, designed to increase the number of job-ready graduates in an innovation-led economy, fuel economic growth in the region and the state, and enhance service to the Indianapolis community and beyond. 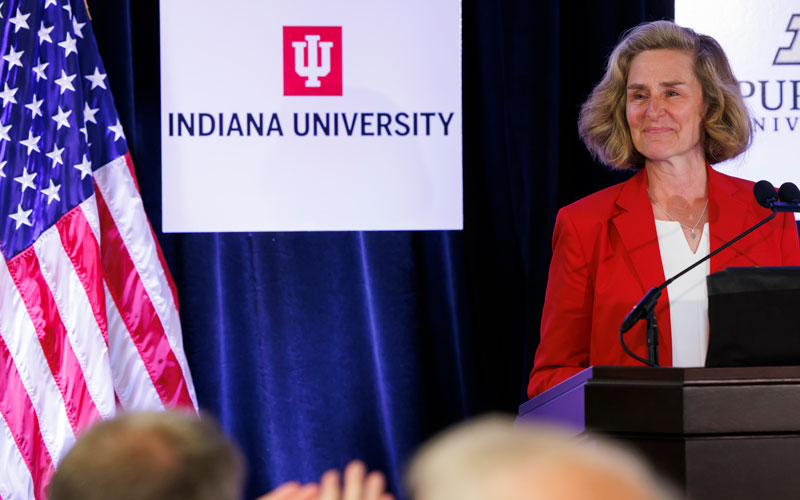 A new vision for IUPUI

The late former Indianapolis mayor, U.S. Senator, and IU faculty member, Richard Lugar, famously championed the creation of a university in downtown Indianapolis. As he said in 1968, “the great cities of the world have many common features which stimulate greater vitality in the central city and a greater variety of experience for every citizen in surrounding regions. A key factor in each great city,” he continued, “is the strength of a distinguished … university.”[1]

More than 50 years later, the IUPUI campus, formed as a partnership between Indiana and Purdue universities, has grown into a thriving urban university campus that has a transformative impact on the city of Indianapolis and our state. As the campus has matured, students have increasingly come to IUPUI seeking the classic on-campus experience that strengthens education and helps shape lives. The majority of the campus’ graduates remain here in central Indiana, where they contribute in countless ways to the civic, economic, and cultural life of the region. The campus’ outstanding faculty contribute to a thriving research enterprise. And IUPUI’s deep commitment to community engagement that improves the lives of the people of Indianapolis and central Indiana can be seen in nearly all it does.

As I have often said during my first year as president of Indiana University, the Indianapolis campus has nearly limitless potential to make an even greater impact in the region and the state in the years ahead.

Business and community leaders in central Indiana have expressed concerns about shortages of qualified talent, particularly in the sciences, technology, and healthcare, as well as a greater need for high-end research. And, as the state’s largest public research universities, IU and Purdue have an obligation to evolve and change in response to the dramatically changing needs of the Hoosier state and the growing city of Indianapolis.

Announcing a new vision for the Indianapolis campus

And so, I am pleased to announce that earlier today the boards of trustees of both IU and Purdue approved a new framework for our future operation and cooperation in Indianapolis.

This new vision will transform IUPUI into separate academic entities in which IU and Purdue will govern their own programs.

Indiana University, which already has responsibility for the overall campus, will retain its current schools and programs, including intercollegiate athletics. The campus will operate as IU-Indianapolis.

Various operational details will be worked out through careful planning and consultation with all affected groups in the months ahead, with the realignment to be completed in time for the start of the 2024 academic year.

The new framework also creates opportunities for even closer cooperation between IU and Purdue. We intend to collaborate in countless ways, including in the creation of a joint biosciences engineering institute, which will develop new life-enhancing therapies and technologies and create a much-needed pool of professionals whose unique research and training will create start-ups and attract new companies to Indiana.

This truly is an historic moment for Indianapolis, for both Indiana and Purdue universities, and for our entire state. With this realignment, we are building on more than 50 years of accomplishment in Indianapolis to catapult us into a vision to prepare our students for the next 50 years—and beyond. This bold move will allow us to more effectively provide the world-class higher-education and research capabilities needed by the state at a time when economic and technological forces are driving enormous change.

Serving students, catalyzing research, and redoubling IU's commitment to Indianapolis and the state

The new framework calls for a more energized role in Indianapolis for both universities, with an even greater number of graduates who are ready to participate in our modern economy. It is envisioned, for example, that both IU and Purdue will offer degrees in computer science, resulting in an increased pipeline of talented graduates, which will, in turn, help attract and retain high-tech firms.

Of course, our talented students are the reason we exist as a university, and at IU, they are the center of our universe. On our campuses across the state, we are implementing bold new programs and initiatives to help ensure their success. We will take advantage of the momentum the realignment creates, building innovative new programs and strengthening existing programs in ways that will prepare students not only for their initial job, but for their entire careers. We intend to renew our already strong commitments to both producing nationally and globally recognized leaders, and to supporting and providing opportunities for traditionally underserved students.

A few months ago, we launched a plan to improve Hoosier health by increasing undergraduate enrollment in the IU School of Nursing at IUPUI by 50 percent. We are unwaveringly committed to dramatically expanding education in the sciences—and we will better integrate our science programs with the IU School of Medicine and other allied health science schools, further expanding the number of students prepared for careers in the health sciences.

This new arrangement will also provide opportunities to create immersive new programs in innovation and entrepreneurship that lean into Indianapolis’ wealth of business, sports, nonprofit, and arts organizations. To accomplish this, we intend to extend the Indianapolis reach of IU’s renowned Kelley School of Business, which is highly ranked by US News & World Report for its excellence in entrepreneurship education and research.

The new framework will also allow IU to greatly enhance research activity, especially in biosciences, the environment, and medicine. The IU School of Medicine is, of course the largest medical school in the nation, and ranks 14th nationally among public universities in terms of the funding it receives from the National Institutes of Health, the leading federal funder of biomedical and public health research. Today, I am announcing a goal of moving the school from the top 15 to the top 10 in terms of NIH funding at public universities in the next five years. Achieving this goal will not only benefit the IU School of Medicine, but also the broader campus, as we take greater advantage of teaching and research opportunities that connect science and other programs on the campus to the School of Medicine. Moreover, the state will benefit through the direct and indirect effects of increased research funding and the resulting greater numbers of new business startups.

The realigned Indianapolis campus will be even more deeply committed to helping to improve the quality of life in the capital city. It will enhance our efforts to contribute to central Indiana’s economic growth in the STEM fields and beyond. And it will help attract existing businesses and industries to Indianapolis that value the presence of a world-class urban university.

This new vision has already earned the endorsement of a broad cross-section of the city and state’s business, political, and community leaders, including Governor Holcomb, Mayor Hogsett, and of course our hosts here at the Chamber. We deeply appreciate that support.

So, what can you expect to see from IU-Indianapolis in the coming decades?

You can expect to see an acceleration of innovative degrees and solutions that prepare all students for rewarding careers and fulfilling lives.

You can expect to see an expansion of IU’s Luddy School of Informatics, Computing, and Engineering, with new programs in computer science.

You will see an increased culture of innovation and entrepreneurship that integrates the campus ever more closely with this vibrant city.

You will see a thriving research enterprise that drives economic growth and attracts top faculty and students.

You will see a public medical school ranked in the Top 10 in NIH funding, collaborating across a campus that leads the way in improving Hoosier health.

And you will see continued partnership with our friends and colleagues at Purdue, through the establishment of a joint biosciences engineering institute and other initiatives.

What will ultimately emerge from the vision I have described today will be a world-class urban university, a higher education powerhouse—one that will be an exemplar for the nation, and one that will meet the needs of our students, faculty, and the city of Indianapolis for many years to come.

This great city deserves nothing less.

More about the new vision for IUPUI